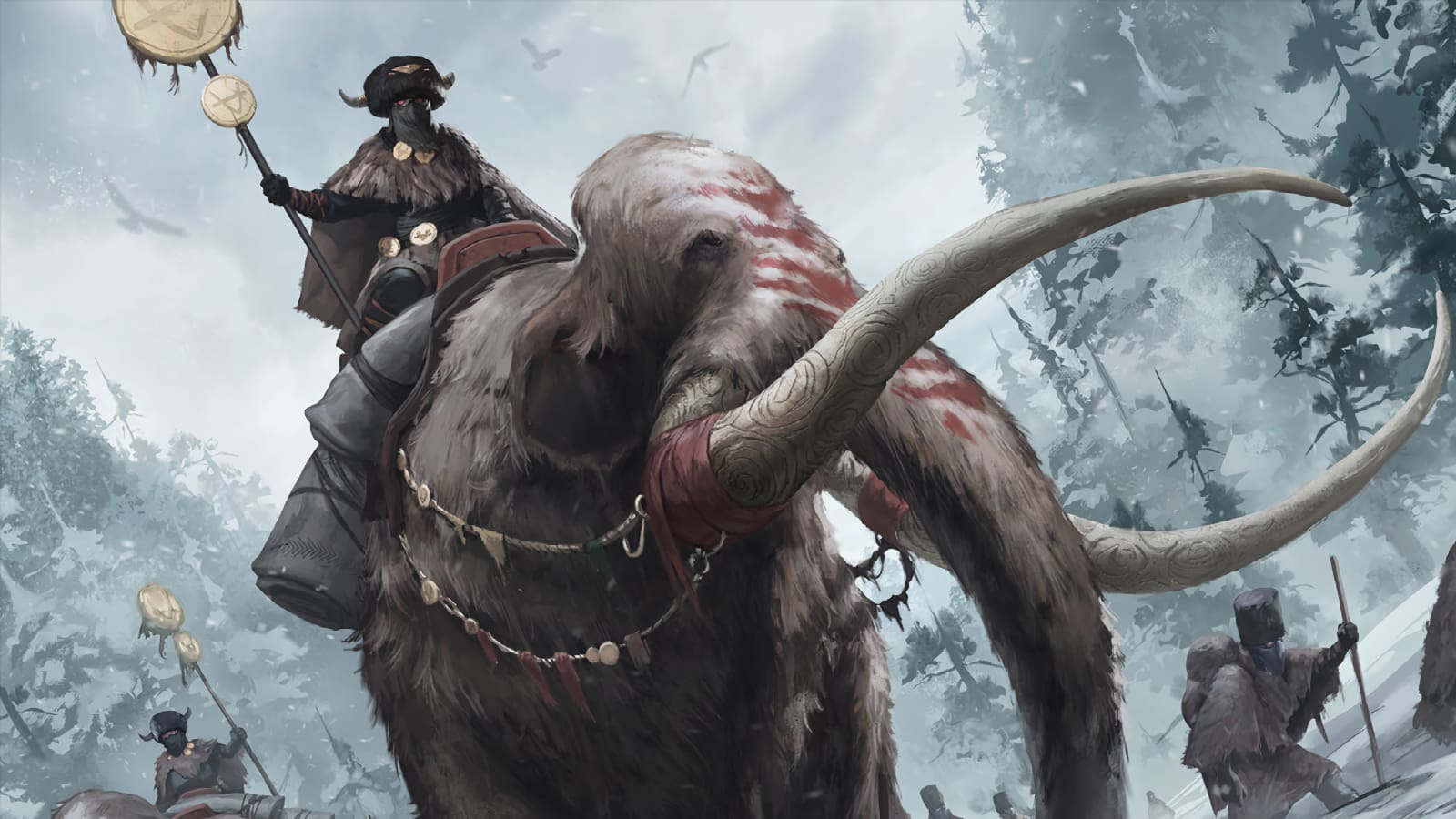 This is the sixth in a series of posts that provide ideas – bare-bones outlines – for Degenesis campaigns. They’re meant to serve as inspiration so you can use one of them as-is, grab bits from each and add them to your own ideas, or riff off them and come up with something completely new.

The wanderings of the Garganti seldom take them to the town of Odrodzenie, the only permanent settlement for days in any direction. When a group of them arrives, resplendent on their mammoths, the entire town gathers to welcome them. The cellars are meager, but all bring out what they can – soup, distillate, bread, even smoked meat – anything to make the mammoth riders feel at home. It is a point of pride to this small community – hospitality provided to the somber Garganti is said to bring a year’s good fortune.

Sadly this time there is no good fortune. The mammoths fall ill. The enraged Garganti threaten to destroy the town unless those responsible for poisoning the mammoths are found. Suspicion quickly falls on four travelers – the only outsiders – who are are staying at the inn. No matter that the travelers don’t even know each other and just happened to be in the same inn at the same time. No matter that they had nothing to do with the mammoth poisoning.

You barely escape the town alive. The mammoths are more than mounts; they are sacred to the Garganti. You’re on the run, hunted by the townspeople who want you to take the blame, and by the Garganti who believe you have perpetrated a heinous crime.

These PCs have been brought together by a fluke of fate. Their group alignment is Chance, as they have nothing other than terrible circumstance in common.

Every Scrapper in the area has heard the stories of how the famous Scrapper Dulik hid a vast collection of Bygone artifacts in a subterranean lair, only to die trapped with his treasures after a terrible earthquake. In the century since the event, the stories of Dulik’s Hoard have grown taller. But the location is still a mystery. Or was, until now.

Each of these PCs is engaged in this dangerous expedition because they are willing to risk everything for greatness. They are bound by the alignment of Ambition.

The Biokinetics have names: Tooth and Claw. They were born in the same village as you. Twins. Deformed babies who grew to become something else before running off. And when they returned, they took the whole village with them. Well, not the whole village. The four of you survived. When the Spitalians found you huddled in a pocket under the rubble of the broken stone mill, they took you in and made you part of their Cult.

That was years ago. You have become strong of mind and body, and you serve in the only war that matters – the struggle against the Primer. Now you’ve heard rumors that Tooth and Claw have been seen in the hinterland, picking off villages one by one. They are fearsomely powerful Psychonauts, but they are not indestructible.

To some in the Spitalian Order, fighting the Primer is the right thing to do for abstract reasons like the survival of humanity. But for all four of you, it’s personal. And now you have the opportunity to hunt down and kill the creatures that took almost everything from you.

While these PCs are all Spitalians, they are joined primarily not by Dogma, but by the alignment of Revenge. A raw, seething hatred boils within each of them, driving them to seek and destroy this deadly pair.