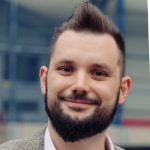 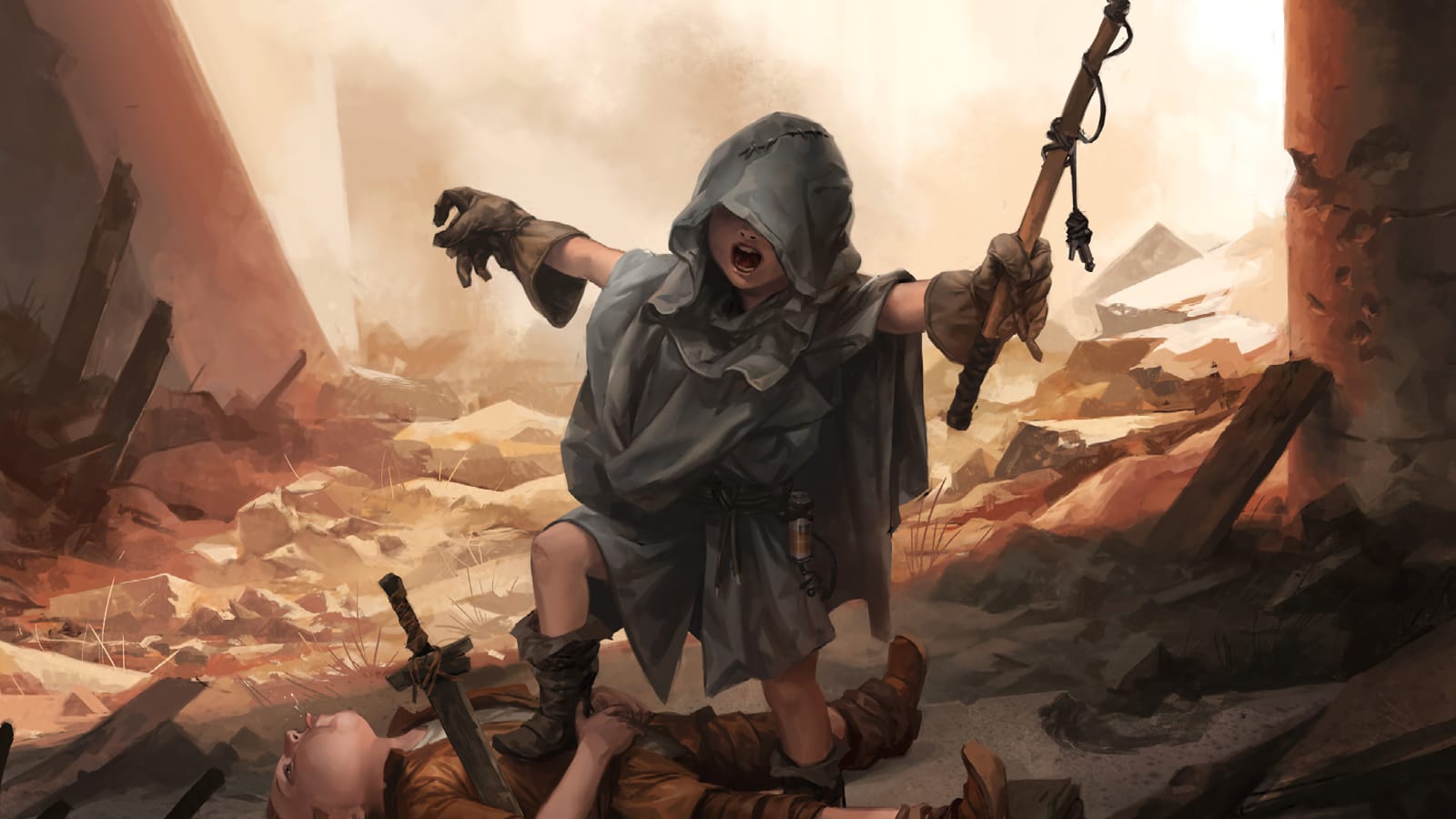 As a GM one of my favorite parts about starting a new group is the so-called Session 0. For newcomers in the TTRPG world, I will try to explain this term briefly. A lot of people in the roleplaying world talk about their game nights as sessions. Session 0 is the first session before starting a new system, campaign, or adventure. During that first session there is little to no play time, instead the gamemaster and the players focus on understanding the mechanics of the game. Session 0 often includes the character creation for an upcoming adventure.

Depending on your background as a player or a game master, you might have experience with character creation in different roleplaying systems. There are limitless mechanics and ways to create characters. Some systems rely on rolling dice for certain character traits, some systems provide a pool of points that a player can distribute to certain skills and some systems use a mix between these mechanics. Depending on the base mechanic of a game and the type of player who is creating a new character, there are different approaches to this task. For now I don’t want to delve too deep into roleplaying theory, so I will decide between narrative driven character creation and mechanic driven character creation.

A player who is focusing on the underlying mechanics of a roleplaying game during character creation tries to make a character based on assumptions, which is beneficial during the actual play. For example: If you are playing a warrior type class who wants to focus on unarmed fight in D&D, it is beneficial to prioritize strength because it is modifying your damage output. Extreme cases of adapting the character to the rules of the game is called power gaming or minmaxing.

So now you may ask yourself what this introduction has to do with character creation in Degenesis. My answer to that is: It is important to understand where a lot of players are coming from to help them create a character that fits the system well. Erik mentioned in an earlier post that Degenesis is a Setting First game. A lot of the game focuses around the lore and a new player character needs to find a place inside a vivid world. If we take a look into the two approaches of character creation and which one fits best, one could assume that the narrative driven approach is the best way to build a character but this isn’t the whole truth. In my opinion, a Degenesis character should always start from a narrative perspective and incorporate some mechanics along the way. To make myself a little bit clearer, I will describe the process of character creation by reference to a player character from my own group.

So my new player read the condensed information and decided to play a Paler. We met online for the final part of character creation. In Degenesis the character traits are divided into 6 attributes with 6 associated skills each. Attributes start with 1 point. In character creation you are allowed to spend a maximum of 2 points on each Attribute or Skill from a pool of points. For a new character the rules allow you to spend 10 points on the 6 Attributes and 28 points on the 36 Skills. That means that the maximum for each Attribute is 3, and 2 for each Skill. These maximums can be extended by the choice of Cult, Culture and Concept.

She decided to distribute her Attributes as follows: 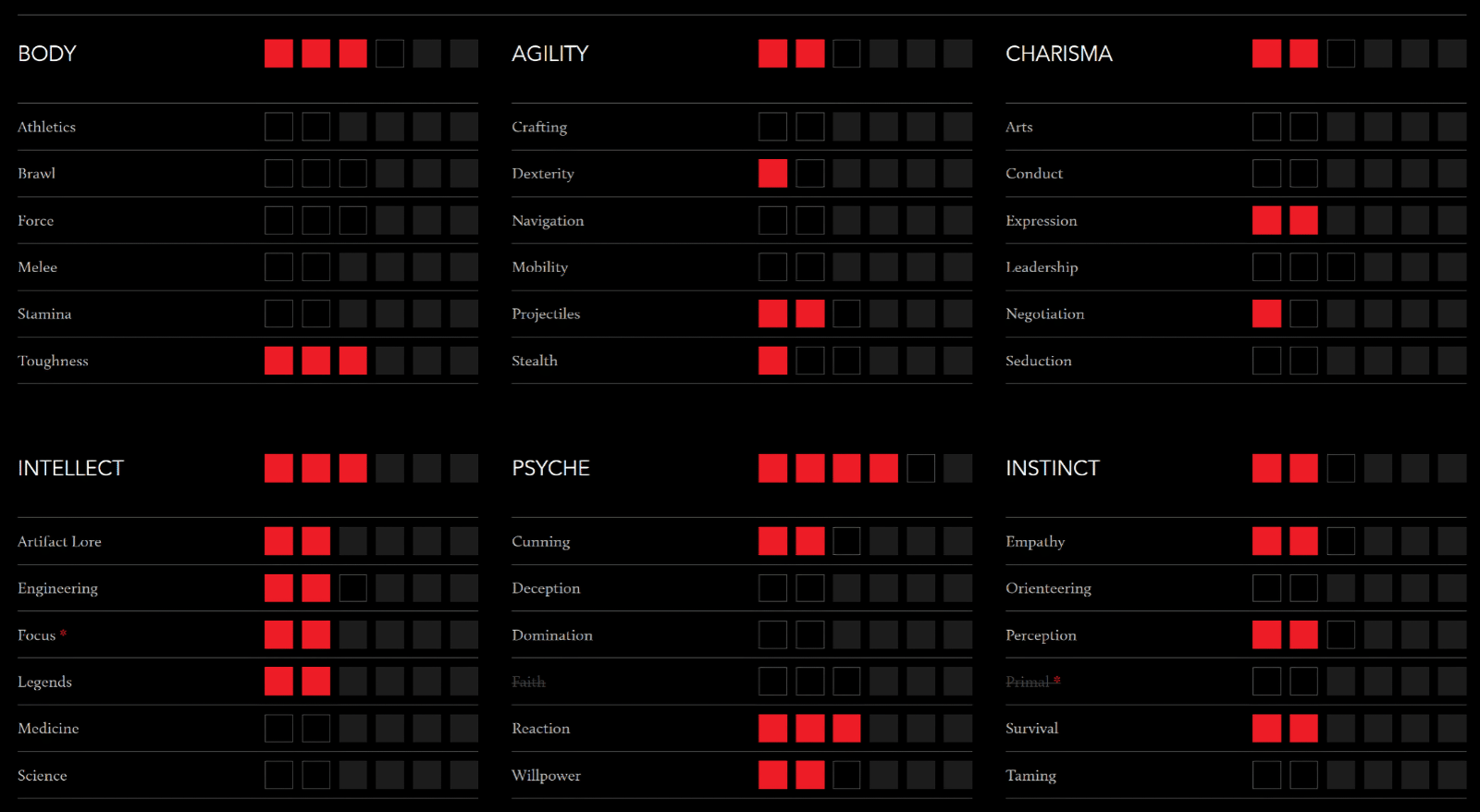 I normally advise against ignoring one of the Attributes and the according Skills completely, but there are always borderline cases where abandoning certain character traits makes sense. For this character she decided to invest at least one point into each Attribute. After that she distributed the 4 remaining points into Body (1), Intellect (1) and Psyche (2) to support the backstory of her character. She wanted to play an intelligent “silver tongue” character with a defensive side. Because of that, she also put a lot of points into Intellect- and Psyche-based Skills. I advised her to spend some points on Toughness, Athletics, Focus and Willpower because these Skills determine traits of the character like Flesh Wounds, Spore Infestation and Ego.

Flesh Wounds are the life points of a character. They are calculated from Body and Toughness. So it is advisable to spend at least some points on Toughness. The formula for the calculation is fairly simple:

When we are done with these calculations, we have the backbone for our new character. In the second article about character creation we will look into the Rank, Potential, Legacy and backstory of the character.