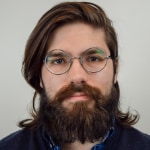 It’s been more than a month since I started reading Justitian. I took people’s advice to heart and decided to read it from cover to cover, first starting with The Righteous Fist, then with Moloch. So seriously did I take that advice that I refrained from even downloading Moloch until TRF was over. After all, it seems it was conceived in that exact order, at least arranged in such a way; only after finishing Moloch I realized how important that was. Information is dispensed in a very particular fashion – definitely in a premeditated way. But hey, I’ll go back to that later.

I will do my best not to scatter to the four winds with this review, although that might be difficult. So, just for the sake of that and too-long-didn’t-readers, I will kick off with a simple sentence.

Justitian is possibly the best piece of worldbuilding, storytelling, general narrative and immersive consonance I’ve ever came across. Full stop.

There, you can leave now. You’re free. 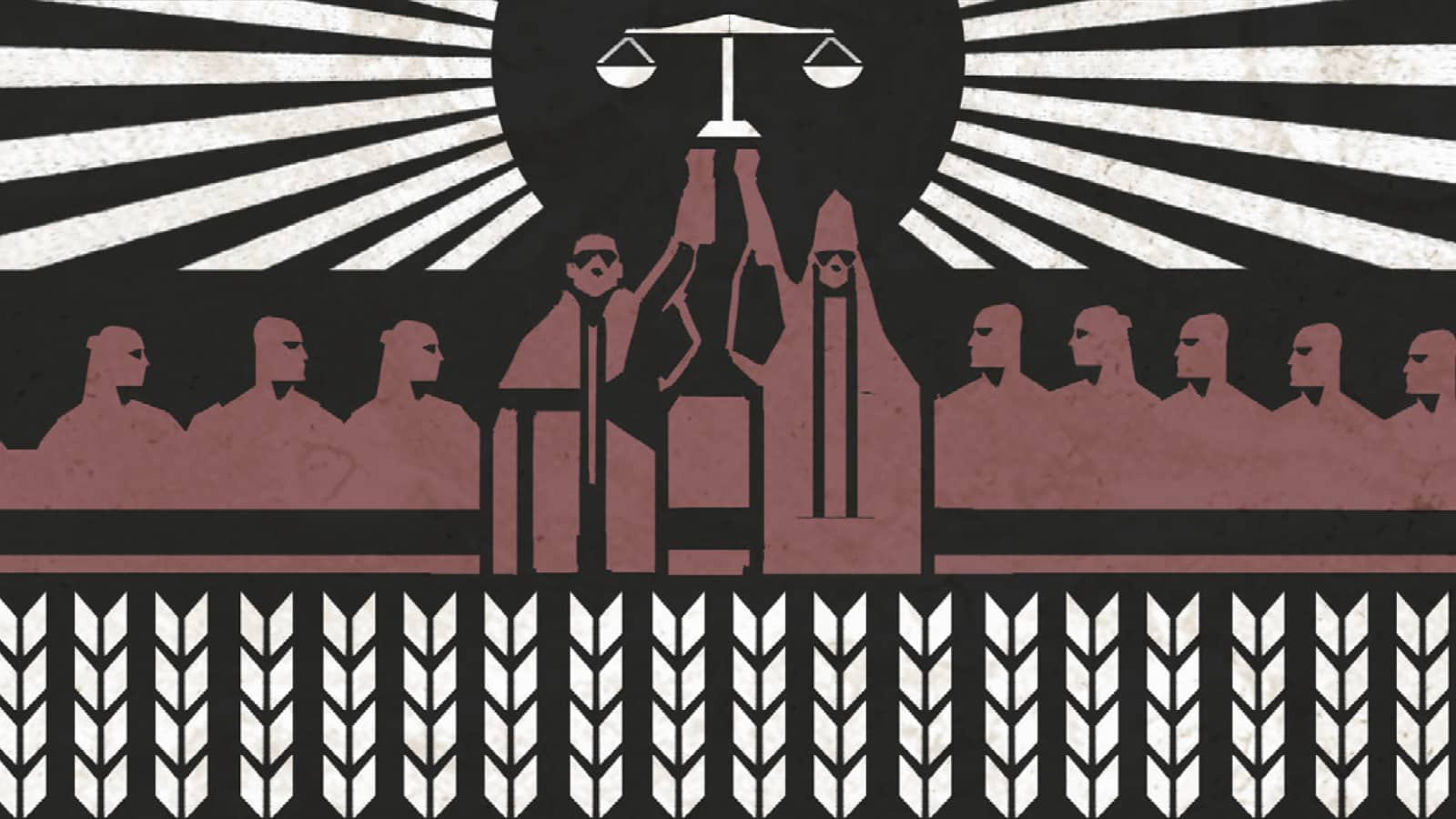 But if you’d like to stay, great: I was intending on explaining myself, probably in a non-practical, redundant yet in-depth way. Let’s get to it.

When I say that Justitian is a masterpiece in terms of worldbuilding, I feel it would be unfair not to address the rest of Degenesis. The rank of “magnum opus” can’t be achieved on it’s own – it needs a context, it needs to have a platform, and most importantly, it needs to have a workspace in which to develop. That’s why I think every previous piece of work belonging to Degenesis composes the workspace necessary to make Justitian the masterpiece it is. Degenesis is the perfect birthing pod for such a hit.

To give a better explanation about this point of view, first I want to point towards Wikipedia’s (yes, the most trusted and infallible source ever made) definition of “masterpiece”:

Masterpiece or magnum opus in modern use is a creation that has been given much critical praise, especially one that is considered the greatest work of a person’s career or to a work of outstanding creativity, skill, profundity, or workmanship.

Okay, I can definitely work with this.

The highlighted phrases or words in that quote are intentional. The first definition says that the term is assigned to something that’s considered the “greatest work of a person’s career” – saying that it needs a) a career to which the work belongs to and b) other works to which compare it and then reach a conclusion. So with this first idea of a masterpiece, we need not only the piece, but contextual and neighboring work. With this complete work we see development, we see evaluation and we see evolution – we think of someone’s work and career as something living, organic, that evolves and grows. I am confident in saying that Justitian is indeed Marko’s magnum opus, without fearing being wrong, but I can say that because I saw how it evolved since Rebirth.

In the second set of highlighted words, we get a second definition: you can acknowledge something as masterful if it shows an outstanding amount of creativity, skill, profundity or workmanship. And here I could argue that all Fantastic Four are present. Justitian is not shallow. It’s a book divided in two tomes, portraying different aspects of the work. Just like À la recherche du temps perdu, by Marcel Proust, is a novel written in seven different tomes.

In terms of skill and workmanship, it’s a book that from an editorial design point of view, shows an absurd amount of skill and expertise – to no one’s surprise I guess, coming from Sixmorevodka. From the layout to the grid and dissection of information in columns, boxes and sidebars, Degenesis always delivers with its wonderful design and craftmanship. That’s no different in Justitian. Creativity is kind of the gist of Degenesis, so I won’t go into detail about it. You just have to read it to find that out.

So, how does Justitian achieves profundity? It’s not just about page count. “The Righteous Fist” establishes a principle: if you’re going to write the name of a settlement in a map, you have to write about it. You have to give it a geographic spot, a name, a population, a context, a story, an identity, and most importantly a conflict. Or two. Or even three. Every name in a map should be a place meant for the players to visit, to find out about. Mysteries to unravel, characters to meet, conflicts to defuse, or push. My favorite example of this would be Sinder, a small town of mythical fame to the Judges. It’s upnorth and seems relatively quiet. But not only have sightings reported of a nomad Clan that threatens to rampage against them, but also of a secret Horde of Palers taking base nearby and stealing provisions during the night. Suddenly this relatively quiet town has conflicts in two fronts: one frontal assault, one backdoor operation. Meanwhile, its City Judge is struggling to fortify the settlement against the incoming threat.

A literal one pager of a town is suddenly a proper setting for a whole adventure. It has conflicts, it has characters, it has a meaning and it has reason for players to be there. Apply this principle to every single named town, and you have one hundred or so pages of content. And it only goes up from there. Imagine.

The so-called “Righteous Fist” portrays itself as the biggest and most important place in all of Degenesis’ post-apocalyptic Europe. As such, the treatment it receives is equal to its size. Now come one hundred and eighty five pages entirely focusing on the city that gives the name to this whole affair. Almost two hundred pages of immense writing work, where the scope is not meant to be “describing” a city; this book is no review of a settlement, this book is no mere explanation of streets and stores. This book aims for something else, something bigger, probably bigger than anything I’ve read before in terms of worldbuilding. Much like Dr. Frankenstein’s project, the scope here is to breathe life into a chunk of text. Create such a narrative that conforms an organic entity, a system that works all by itself, that is able to expand or withdraw to its own whim, regardless of the laws established inside the world it belongs to. Justitian is not proposed as a settlement nor setting; it is conceived, proposed and delivered as a character. Maybe the ultimate character.

Justitian is, plainly put, a living Colossus. So many words injected into it, so many paragraphs and descriptions and stories and places are so ingrained in it that it reached a literal critical mass and became a living piece of narrative. Justitian as a narrative and worldbuilding concept is bigger than anything Degenesis has to offer. The scripted city follows its own rules, with established desires, agendas, needs and goals. It has its own identity, its own personality. You can know, crystal clearly, what the city wants and how it will get it – absolutely regardless of the (quite literal) ménagerie of non-playable characters that cover the metropolis. In both terms of narrative and actual writing, Justitian has grown way beyond anyone’s grasp, and has become an unchained titan. Justitian is, or at least should be understood as, something bigger than any game master.

And that’s the beauty of it. That’s the challenge that Justitian will offer to anyone trying to tame it, be it player or narrator. It is a subgame, a side trial laid out for both players and GMs.

If you doubt my words, then I invite you to read any district, any black-boxed paragraph, any bookmark inside Chapter Three. To me, the entire “The Harbor” district was the last piece of writing I needed in order to realize this. It sent some shivers down my spine, and taught me the lesson: I am in no way bigger than the Righteous Fist.

After reading The Righteous Fist – the first tome – you come to Moloch, the true ménagerie I mentioned before. Three hundred pages of non-player characters fleshed out from scratch – with stories, with agendas, with means and possible ends. The only true fuel that could make such a complex machine as Justitian work the way it does. Every single cult has at least one character that can drive a whole plot throughout the city for as much time as the GM wants without running dry of its potential. Every NPC is conceived in such a way it has reasons to be almost anywhere around the city, giving the players and GMs alike the means to explore and unveil the whole machinery that’s hidden behind the dust of the Righteous Fist. Those NPCs move the narrative, the plot, while the Moloch is ever present, being the sine qua non element of the whole business.

I won’t go into details about the final and massive metaplot reveals that Justitian delivers by the end of the second tome (a practice very much traditional by now in almost every Degenesis release), for it is only an over-killing blow from the already unique experience the book provides the reader. If you are into Degenesis and its mysteries, then those final pages will spin your world around. And if you are not, don’t worry: the previous six hundred pages are definitely the essence of it all.

As a reading experience, as a worldbuilding lesson, as a creative motor, as a character-developing inspiration, as a storytelling and story-devising mechanism, Justitian excels. As a writing and design masterclass, Degenesis: Justitian truly is the promised treasure.

There are lots of comparisons I used while developing my perspective about Justitian, comparing it with a good number of other works that try their hand at worldbuilding, including other RPGs (yes, D&D is involved, and I will only say that, to me, it utterly fails at worldbuilding most of the time) and novels, as well as writing ideas and tricks developed by authors, but I was not very inclined to include them in this weird-kind-of-but-still-not essay, for the sake of not causing antagonism or enmity with other works.

I hope this review proves useful and helps looking into things with different perspectives when analyzing written pieces, specially those that attempt to create more of a whole experience, rather than just showing ideas jumbled into words. There’s so much more to worldbuilding than just “The idea is good!” or “The geography looks cool.” At some point worldbuilding and storytelling have to go hand in hand, helping each other out. And that’s exactly what Justitian does.

Shout out to UnpossibleErik for letting me onto the Train to Baikonur and to McCommie for dragging me into this beautiful thing that’s called Degenesis.