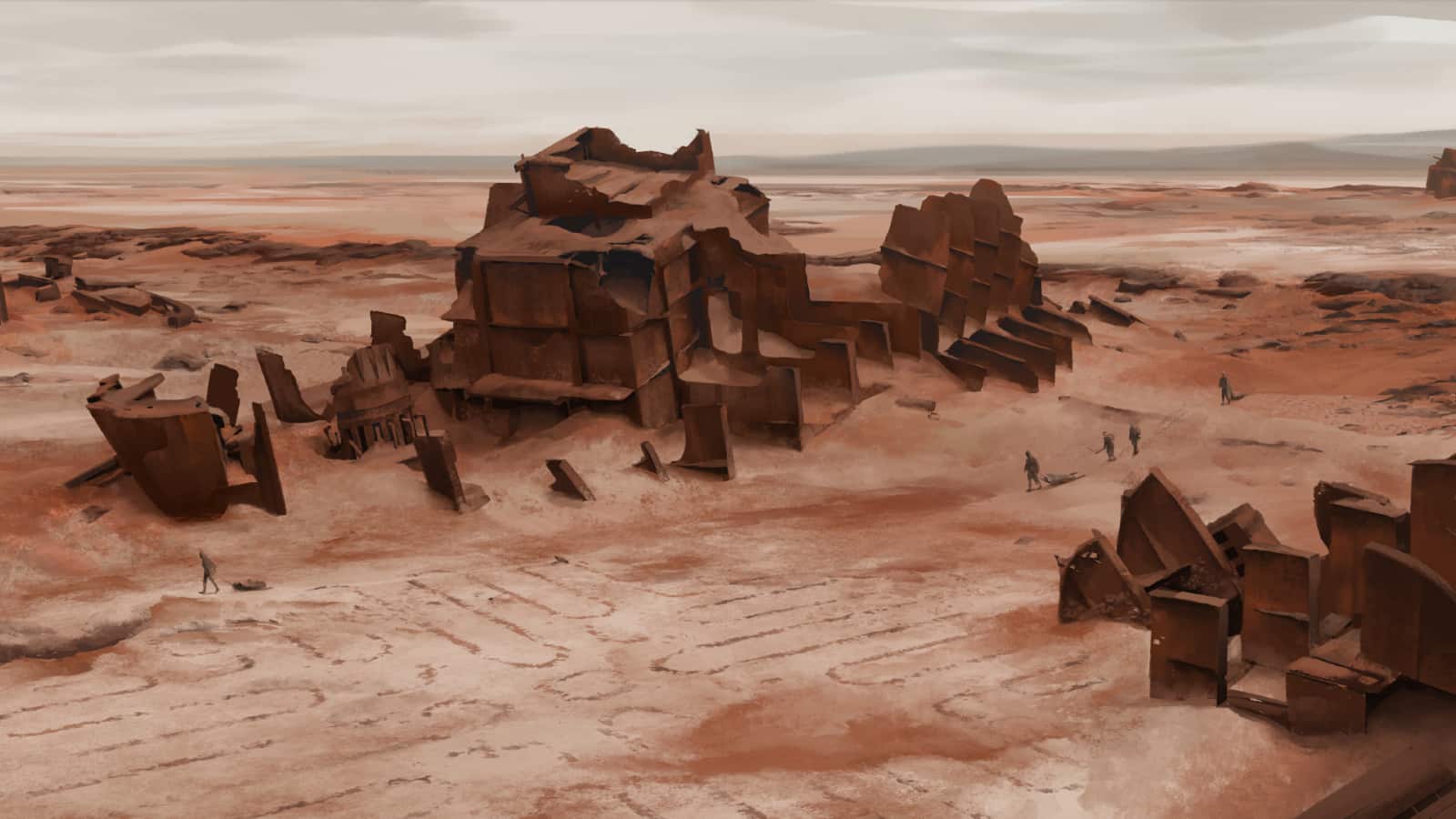 When Luck Runs Out

What happened? You force your eyes open. A hand quivers in front of your face. Your hand.

You jerk your gaze away and realize you’ve been knocked down. Your staccato breath kicks up an ochre dust. A crimson pool grows next to your cheek. You try to roll onto your back. Your legs don’t respond.

Your eyes refocus. Odd. A thin stick extends from your chest, its shadow wavering on the sand as you draw in air and sputter out blood. Fuck. Taken down by a poisoned arrow. You’re such an asshole. The Scrapper goes into the Stukov Desert and gets ambushed by the Nomads. How trite.

Something fuzzy and man-shaped blots out the pale sun. You hear the snick of a blade leaving its sheath.

While new adventures and lore are no longer being published by Sixmorevodka, the material they’ve already produced contains fodder for years worth of gaming. Without attempting to extrapolate from or extend the metaplot, On Location articles will pull together information from across the range of Degenesis books. They’ll delve into geographic areas that haven’t received in-depth treatment, with an emphasis on providing ideas and inspiration for game masters.

Why Are You Here, Stranger?

The Stukov Desert stretches across the north of Borca and Franka like a smothering blanket. Under endless tons of salt and sand lie remnants of the Bygone past – artifacts, wealth, and secrets that could change the course of history. Opportunity awaits in this harsh, blasted landscape. Opportunity and danger.

Here are a few adventure ideas based on tidbits from Degenesis canon, followed by a few reminders about the desert and its inhabitants:

The Epigeneticist didn’t come to you through normal channels, but his Drafts spend well, and he’s promised plenty more when the job is done. Sure, the trip to the western desert will be perilous, but you don’t have to steal anything or kill anyone. Just help him scoop insects into canisters and get him back to the city alive. How tough could that be? (PP, p.81)

Knowledge is power, especially when it comes to the Primer’s effects. Epigeneticist Crommer’s mission is being kept secret from those outside Consultant Petrova’s command. If the Consultant can gain a greater understanding of what is happening to the fauna of the Stukov Desert, she’ll have one more piece to the grand puzzle. The real trick will be getting into and out of the collection site undetected.

Henryk is always telling tales. So when he crashes into the guild hall carrying on about a big Bygone find out in the middle of the Stukov Desert, everyone laughs and pats him on the shoulder. But he won’t stop talking about it, even at last call when it’s just you and him. He pulls out a machined cylinder the size of his fist. It’s smooth, like a mirror. Untarnished. Perfect. “I went inside it,” he says. “Trapped under the sand. The engine room of a massive ship. All the metal was like this alloy, perfectly preserved by the dry air. Invaluable. Help me mount an expedition and I’ll give you a cut.” (J:RF, p.21)

The band of Nomads that roam this part of the desert periodically reveal the opening to this massive submerged factory. And when foolish Scrapper parties show up to gather its riches, the band is ready with traps and ambushes. It’s an easy way to obtain useful gear and weapons. Only now a sickness has spread through the band, weakening them. The odds aren’t even, but they might be survivable.

“Nomads are approaching our little village, just north of Sinder. We don’t want a fight, but it’s our village. We can’t leave, either.” The old man’s leathery face is anguished. “I’ve heard you have experience handling delicate matters. Could you help us?” (KAT, p.217)

The inhabitants of Salt Flat are a hardy breed, but in a fight they’d be no match for the Nomads and they know it. They have little to bargain with, and the Nomads don’t even speak their language. But if they’d be willing to share from their well and provide other gifts, there’s a slim chance a bargain could be struck.

It’s so dark that at first you only know it’s Merra by the bright end of a cigarette hanging from her lower lip. “Get over here, under the awning.” Howling winds are buffeting the lightly falling snow in waves. But she’s taking no chances. “Look, I gotta make this quick. Them wirehead drones are always out. Always. Here’s the situation.”

She takes a long drag and exhales through pursed lips. “A little team of wireheads went looking for something really important out in the desert. They found it, but they got almost completely wiped out by the Nomads. Only one is still alive. The wireheads have hired a rescue team. You get there first and get the wirehead back to me alive, and you’ll get enough Drafts to go retire somewhere safe and comfy.” (J:RF, p.21)

A team of highly-trained Shutters led by a Fuse named Rootkit spent weeks in the snow-dusted desert with specially-modified equipment, probing for signs of a Project Tannhaüser bunker buried under dozens of meters of sand. Their sonar rig finally found it, mapping its precise location and measurements. Then a Stukov hunting party found them. Rootkit survived, but his primary radio was destroyed. He had to send a message back to the Cluster in the clear, and Bosch’s people intercepted it.

Rootkit is alone and injured in hostile territory. Who will get to him first? Will he even be alive? And what happens if the Stukovs get hold of the data?

Groups heading into the Stukov Desert must contend with the bone-dry air and an ever-present wind. It rapidly saps energy, makes long-range vision and hearing difficult, and interferes with navigation. It also quickly renders all but the most heavily-ruggedized electronic gear useless. Extra precautious must be made for machinery to function properly.

Most of the year water must be carried in, and gathering more of it can be a challenge for the most experienced desert explorer. Stukov Scorpions, Dust Worms, and Husk Spiders (KAT, p.256-258) make travel in the desert difficult for the fortunate and deadly for the unlucky. And there’s always the possibility of a desperate Gendo pack roaming through the area. But the biggest threat of all are the Stukov Nomads.

Ways of the Nomads

The Nomads follow long-established migratory paths through the vast wasteland, knowing that if they stay in one place for too long, they will exhaust its resources. They know where hidden water lies, and how to hunt the wily creatures of the desert. They even set up breeding chambers before they head out. When they return months or years later, they’ll have enough of the local fauna to eat.

They tolerate no outsiders. Their isolation in the desert is deliberate, their distaste for the foul ways of so-called civilization is visceral. While they can’t be everywhere at once, they send out scouts to sweep ahead of their path. They know the sights and smells of the desert, the behavior of the animals, and when the weather is about to shift.

All but the most capable and elusive intruders are eventually found. Found and killed.