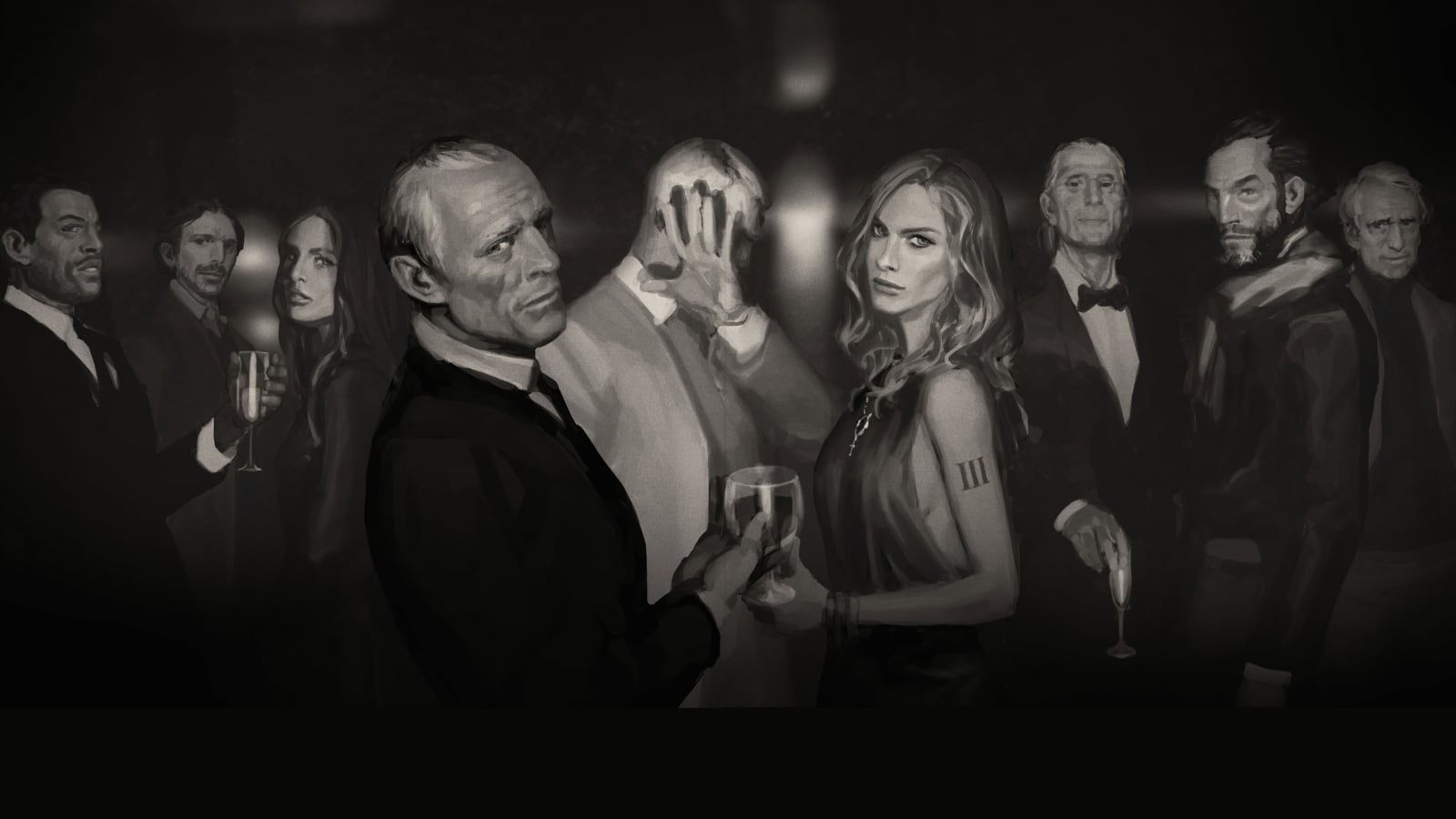 Degenesis gives you as a GM plenty of tools to embroil your PCs in the kind of complex, evolving relationships you often find in narrative fiction. Think of Magneto and Professor X, two friends who care about each other, even though they serve opposing goals. At times they’re at odds, at times they are allies. Or Hanna and McCauley in Heat – the cop and the thief – who in other circumstances could have been comrades.

Conflict in Degenesis ranges from political machinations to subtle one-on-one social combat to physical violence. Katharsys reflects this – a third of the available skills are useful in social conflicts, physical combat is never a safe bet, and healing takes time. In other words, the game promotes non-physical conflict and punishes wanton violence. For the most part this is a world where everyone is just trying to survive, and even those who employ violence usually do so with self-preservation in mind.

Yes, NPCs belong to Cults and Clans, each of which has its own ideology and goals. And yes, sometimes those goals lead to bloody conflict. But this isn’t The Lord of the Rings or Star Wars; there is no metaconflict between objectively-defined Good and Evil. There certainly are causes worth dying for, but decisions about who to trust and who to fear are seldom straightforward. NPC motives, group goals, and the interplay of personalities can create unexpected alliances and bizarre animosities. Here’s an example from my campaign:

On the Road to Bassham

From the moment they meet on the outskirts of Mulhouse, there is something familiar about Mira Graff. Roch can’t figure out what it is – after all, it’s not like he ever met her before. True, he’d spent time in the cantons, but as a Hellvetic soldier he hadn’t exactly been mixing with her class of people.

By temperament and duty he doesn’t trust her. He rarely trusts anyone. And when he asks to see her forearms (so he can check for Apocalyptic tattoos, a rationale he doesn’t bother explaining to her), she refuses and storms off in a huff. Which may be just because she is a spoiled mayor’s daughter. But the reaction only makes him keep a closer eye on her as they ride along the foreboding road north with Roch’s friends and other fellow travelers, all of them resigning themselves to the long, fraught journey to Bassham.

Then one night she appears at the campfire. “I apologize, Roch. I’m not used to being on the open road and having to explain myself to people. Go on, inspect my arms.” In the firelight Roch reaches for the left sleeve of her tunic. She leans in close, grinning playfully. She whispers in a voice he remembers, “You always were the smartest one.”

The voice. The teasing look. The hair is different, the tattoos on her face have been painted over, but this is her. This is Kyra Bloodclaw, the Apocalyptic assassin he delivered in handcuffs to the Alpine Fortress over a year ago!

NPCs Are The Protagonists in Their Own Stories 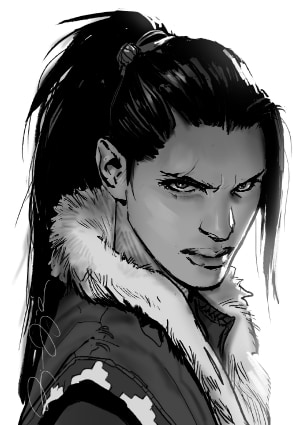 Months earlier I decided that Kyra Bloodclaw had escaped Hellvetic custody. The idea came to me when I thought about her interactions with the PCs, particularly Roch, during the several sessions in which they had her in custody.

After hunting her down for a long time they took her captive, but did not mistreat her. In fact they took steps to make sure she was safe during a life-threatening encounter with a Psychonaut. Even when she tried to escape, they did not hurt her.

For her entire life, authority figures had always represented themselves as custodians of civilization and justice, while acting only with cruelty and arrogance. Yet here were three men who served the Hellvetics, the Judges, and the Spitalians – three contemptible Cults – but somehow hadn’t let their access to power warp them. They were by no means soft, but they were fair. They’d hunted her for months, and for reasons she couldn’t fully understand, that blend of tenacity and restraint impressed her.

The road north was becoming more and more dangerous. She would need the protection of people she could trust, and she knew that sooner or later they’d becoming her way. Lukas would need to return to the home of the Judges, and Armani would have to come back to The Spital. Roch being Roch would be there with them, ever vigilant and humorless, as reliable as the sunrise. They’d most likely pass through Mulhouse, and she’d be ready for them.

I decided Bloodclaw had used her wiles to escape the Alpine Fortress somehow, and out of embarrassment the Hellvetic command had kept quiet about it. She’d set herself up in Mulhouse, taking on the look and persona of an itinerant, somewhat rebellious rich girl. When the Sons arrived, she’d ask for their help.

Her return would create delicious intraparty friction for the Sons of Lucatore. Armani would likely admire her daring and spirit. Who comes back to a former captor and asks for help? Lukas would want to bring her to justice. She’d fled punishment for theft in Justitian and had murdered Roch’s own Hellvetic comrade in cold blood. But Roch had been drawn to her in spite of all that, and had to exercise all of his formidable willpower to resist her charms during their trek to the Alpine Fortress and her certain doom. How would he react to the revelation that she had not only survived, but had also waited for him?

Sure enough, the PCs reacted as expected. Following that night at the campfire, Roch continues to keep an eye on her, but primarily to make sure she’s safe. Lukas has been Roch’s brother in all but name since they were both children. But Lukas believes in the inherent value of applied justice. He doesn’t know quite what to do. And Armani just wants both his friends to stay focused on the path ahead.

I can’t help but love this situation. They’re already undertaking a perilous journey. They’re being shepherded to the Protectorate to answer questions about what happened during a certain battle in the south of Toulon. They are riding into a lion’s den of politics and subterfuge, and they know they’re in grave danger. And now this complication is making the situation more difficult.

As a GM it also gives me more options. For example, if they help Bloodclaw reach Ferropol, she’ll not only be grateful, she’ll be positioned to draw on greater resources because she’s back with her Flock. If for some reason the Sons need help, she might be able to provide some. If they betray her, eventually her Flock will find out, which may lead to unexpected surprises at the least opportune moment.

The Concept is the Key

When I’m looking for opportunities to foster more complex relationships between the PCs and a particular NPC, I work from that NPC’s Concept. It’s narrow enough to help me form a solid understanding of what motivates that character, but it’s also flexible.

I hadn’t initially defined Kyra Bloodclaw in much detail, but I had made a note that more than anything she hated hypocrites. That’s how her Concept of The Righteous manifested most directly. Thinking about that, it made sense that she would respect the Sons of Lucatore, especially Roch.

Leveraging the Concept is also handy because it doesn’t force me to predefine every NPC’s personality in exhaustive detail. A quick description of how their Concept manifests and a couple of notes about quirks or distinguishing behavior is usually all I need unless and until that NPC becomes important to the campaign.

Join Me in the Planetarium

If you want to discuss this post or any aspect of game mastering Degenesis campaigns, the Planetarium channel in the Degenesis Discord is the place to be. It’s chock full of experienced Degenesis GMs who are ready and eager to swap tips and exchange ideas. See you there!